This page is to find out everything we have been learning at school. You will also be able to find Knowledge Organisers and Homework here, so keep checking this page.

If you are at home follow this link for Year 5 Home Learning Activities and look at the pages below to find out what we are doing in school.

Remember to go on BGFL and look at the homework to find work and activities to do at home.

We practised greetings, numbers, danced Spanish style and investigated Spanish History and Culture. In the Afternoon we did art work based on the Artist Gaudi

Here are some photos of us dancing the flamenco!

We have been learning about The Highwayman poem and writing a newspaper article about that fateful day.

Here are some of our finished pieces.

Here is work from Aisha, Beatriz and Khadija

Children here is the clip from the movie linked with our extract in guided understanding.
Miss O'Rourke's Group

Here are the results for 5M. Coins earned in the Maths game, contributed to money that the makers of TTRS would give in aid of Comic Relief 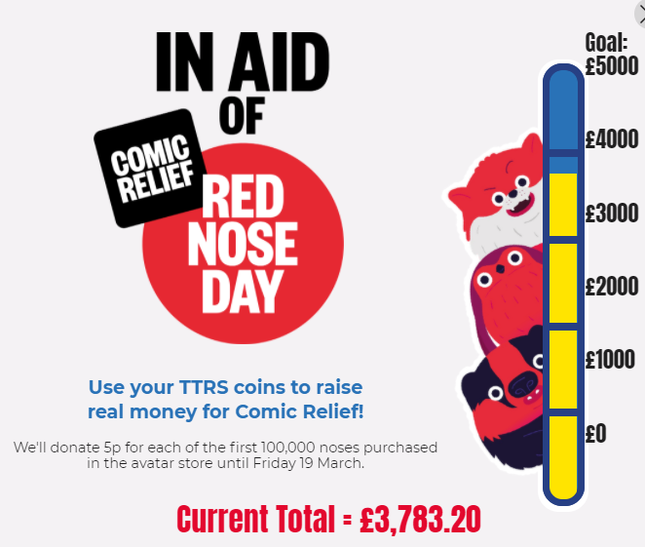 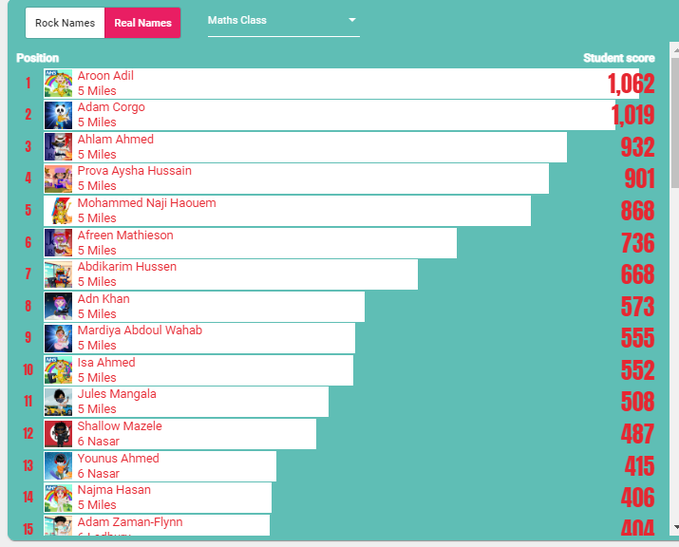 Year 5 have been cooking again! They have been making faces and patterns using sweet and savoury food and learning about what the Tudors may have eaten- rice pudding.

What do you think of these creations over the last few weeks?

Look at what the Year 5 bubble in school have been doing! We have been learning about different food around the world and food that people eat when celebrating, so they made these tasty treats!

This week we have been doing Visual Literacy based on The Nutcracker Ballet. On Monday we watched the 1993 film and talked about the story. Then we tried to draw our own nutcrackers and made comic strips to retell the story.

Here is some of our work from this week 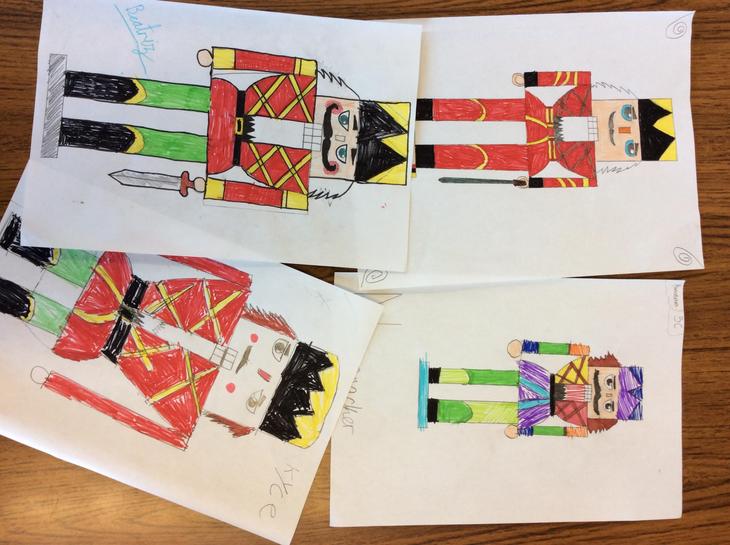 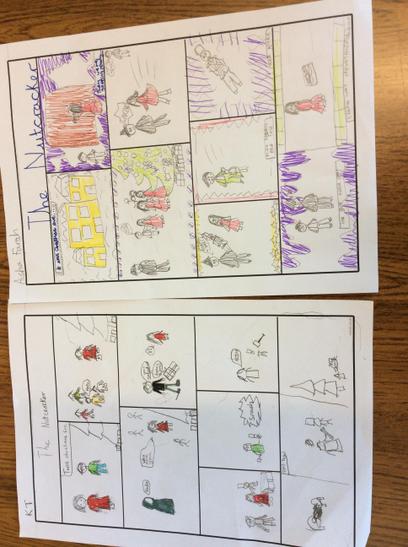 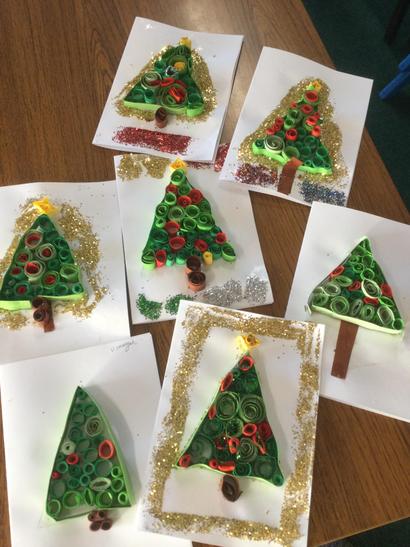 8/12/20- Today Year 5 made pizza as part of our DT Food Technology. We designed the shape, thought about the ingredients and decided on the look of it. We had a great afternoon seeing our designs come to life, they were delicious!

Whilst at home, Year 5 have been writing stories using this picture for ideas. Look at some of our stories below!

Underneath the clouds, appeared a razor of light. The isolated, long pathway led to a group of animals. Trees were alive. The grass was swinging, the wind was blowing. The sky was blue. The sun was bright, and most importantly it was sunrise! All the animals came out to play on the soft, crunchy grass.

In the forest, lay a small acorn. Trees gathered around while they were on patrol looking for any predators. The next morning, the lean, lanky trees fell asleep as the sun rose higher and higher. The groups of hurt birds walked upon the squishy, muddy pathway as the trees immediately woke up judging the sounds the birds were making. The leader demanded that 4 trees would go and see what was out there. So there they went walking in the mud. The sun shone between the bushes and trees, the wind was blowing and blowing as the trees kept on walking. The clouds shrieked with frustration and the sun kept on pushing to see the beautiful view. The animals hid behind the bushes because they were scared of the trees.

It started raining. The animals needed shelter. So they went in their houses and squirrels hid under leaves. The trees irritatedly stomped on the soft, crunchy grass. Sadly, the birds were so injured that they couldn't walk or fly very fast but eventually they found their way and hid with all the other animals. But, they weren't welcome and the trees spotted them and cut their heads off! It was a terrible sight!

The wind was blowing as hard as it could but lightning continuously kept on aiming at the birds and animals and it just wouldn't stop! The grass was swaying and a gust of wind approached pushing the clouds and caused the clouds to move away and cleared the milky moon.

I looked at the astonished faces of my classmates and teachers, the sight of this forest was beautiful. The trees hung over us protecting us from the luminous sun, the plants and flowers were a magnificent sight. I was in a completely different world.

‘'Remember guys, were only staying here for 2 days!’' shouted our teacher. That made everyone moan and grumble and by the looks of it they did not want to leave. It was one of the best school trips ever.

It was 12:30pm and we were allowed to have our lunch, I sat under a majestic, elegant tree. It felt like a dream, I pinched myself a couple of times to wake myself up, it wasn’t a dream. The peeking sun shone on us through the branches as though Mother Nature was taking a picture of us. Not only was I overjoyed of the sight of this place, I was also overjoyed because it wasn’t a dream, it was reality.

Lunch time was soon over, I was able to sneak a few beautiful, yellow flowers into my pocket. The walk continued, in a far distance I could see the bright, shining sun shine in my face, at that point I wished I had brought my sunglasses with me, I had even got new ones for my birthday.

The long, extensive pathway marked by lean trees on either side leaving everyone curious to find out what beholds it. The birds sang beautiful songs and melodies above as they flew elegantly in the blue, shining sky. I could not believe my eyes I could not believe it at all, I didn’t want to think it was a dream.

Time had flown by really fast, I checked my watch and it was already 6:30pm ''Goodness me!” I thought. “Maybe this is a dream.” Night was approaching and it was time to get into our tents. Before we went to bed we roasted some marshmallows and sang a few songs. Well that’s it, my most amazing experience ever, we were hugged by nature.

As the sun rose, in a forest, a 12 year old ,brave boy called Harry was sleeping peacefully, surrounded by tall, skinny trees with large, green leaves poking out of it. He was on the uncomfortable, irritating dirt being stared at by little insects. Near him, there was a little river, clean and suitable for drinking out of, that was visited daily by the other children. He had 4 friends called Bob, Dursley, Vernon and Ron each of whom were born in the same week and lived in the forest.

One day, the five friends met up at the river and heard something, Vernon thought it was a tiger, Bob a lion, Dursley a hyena and Ron and Harry a leopard. But as it came closer, they saw it had a horses legs but a birds head(a hippogriff,a magical creature). In a few moments time, the creature was right next to them when Harry bowed his head thinking it was a bad idea. But surprisingly, it bowed back and let them all go on him.

All of a sudden, a man with a skull like face jumped out of nowhere and unexpectedly started shaking his hand and saying he was sorry, though none of them had the courage to speak. Immediately, Harry noticed that he had a cloak very, very large for him. But then a very creepy woman had appeared and said "Leave him alone Sirius, give him space". With this the man called Sirius backed away and started shouting, "I'm so sorry please forgive me." Then, even more unexpectedly, the woman was wearing a weird cloak that Harry was staring at, clearly mesmerised. "Muggles go away" said the woman. Then they shuffled away but stopped Harry. "Harry I don't know if you knew but you're a wizard, a very famous one too..."

In the morning, there were these 2 siblings who were always curious. That day, they were strolling around town and saw a forest. It looked pretty suspicious and spooky. Not surprisingly, the siblings thought of going in there, so they did...I don't know what was going in their mind. There was large gate with spikes on top. The siblings pushed it with all their might. Finally, it opened they went in with no hesitation at all.

The forest looked misty and haunted. After walking awhile, the started hearing animal noises like howls and that. There were dead trees everywhere..The pathways were very small and old which made it scarier for the siblings. If you made a small noise there would be a loud echo like it was big room. They got tired after, but they had nothing with them. Then they sat down on the dirty, muddy grass. They were frightened too don't forget that. It was getting dark sooner and sooner. They extremely regretted going in there.

"Should we go back now or later because its kind of cold in here" the sister said quietly. "But how are we going to find the way?" the other sibling said. They thought of looking at the ground and tracing back their footsteps. Not even 20 minutes passed, they got lost. It was like they were in a Halloween maze but there's no exit to leave .They gave up quickly because they knew they wouldn't find the way.

In the distance, they could see this ray of shining light. It was very odd for them because it was the night. The light was bright yellow and it got brighter and brighter. It was their only lead for now so they followed the light. It took them a few minutes to reach the end of the blinding, yellow light. They stopped for a minute. ..... . They didn't know if they were seeing right or not or if they were dreaming. There was this gigantic, nature-looking portal. It looked like a normal door.

The Vikings have invaded!-Thursday 22nd October- Portals to the Past 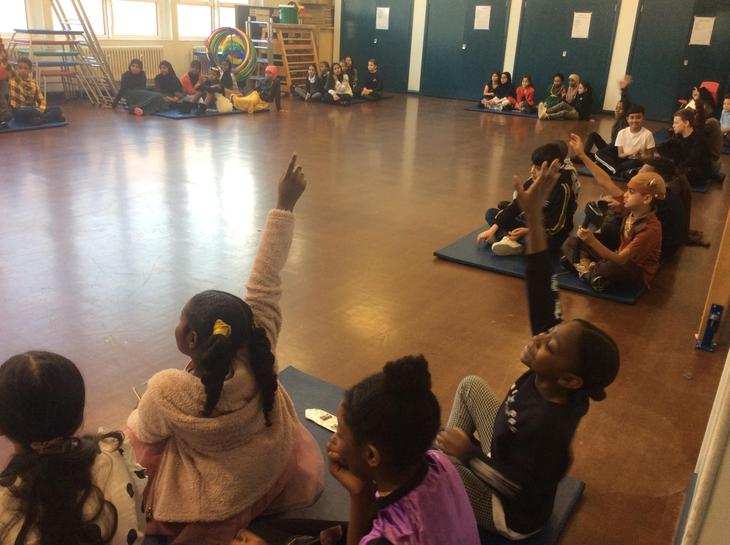 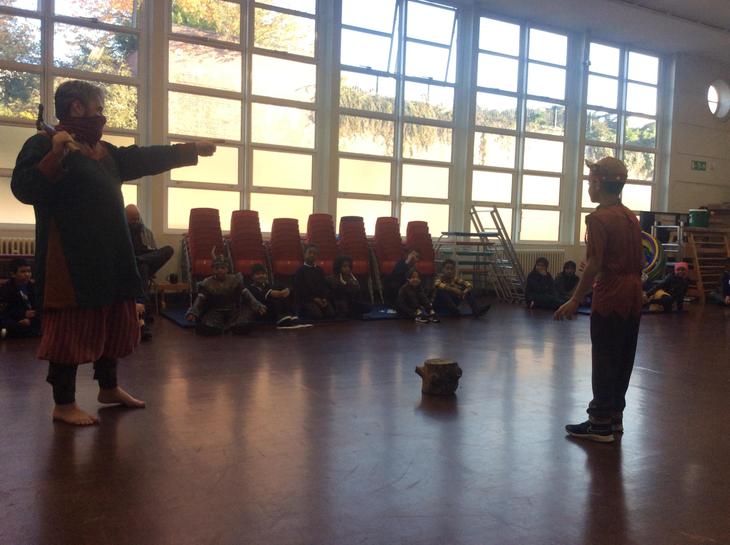 We have been writing Kennings which are Viking poetry. Here are some examples. Can you guess what they are about?

Look at all the things we have found out this morning! We have even been writing our names in runes, the Viking alphabet.

Nationwide competition! Can Brookfield's school become the best in England in TTRS?

Viking Limericks: here are some of 5M's limericks about vikings

We have been learning about how to be safe online so when we do our work at home we can stay safe. After the assembly from the Internet Legends we have made our own Class Charters about what we have learnt.

Look at 5Cs promises below:

We had a great day yesterday taking part in poetry day! We read our poem called 'Heron' and learnt what the lost words meant, we did some acting of the poem, wrote our own and did some wonderful art in the afternoon!

We even tried feather printing!